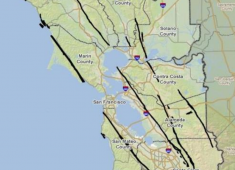 Hayward is located in a seismically active region that contains several major active faults, including the San Andreas Fault, Hayward Fault, and Calaveras Fault.  The Hayward Fault crosses through the city and generally runs parallel and within a few hundred feet of Mission Boulevard.  Other potentially active faults within Hayward include the Chabot Fault, the Carlos Bee Fault, and several adjacent and secondary faults.  As a result of its location and geologic setting, the city of Hayward is subject to a variety of seismic and geologic hazards, including fault rupture, strong ground shaking, liquefaction, and landslides.  In addition, segments of the city could flood if an earthquake generates a tsunami or causes an up-stream dam to fail.  This goal and its supporting policies are designed to minimize risks associated with seismic and geologic hazards.

The City shall enforce the seismic safety provisions of the Code and Alquist-Priolo Special Studies Zone Act to minimize earthquake-related hazards in new construction, particularly as they relate to high occupancy structures or buildings taller than 50 feet in height.

Fault Zone:Zones in which cities and counties must require special geologic studies to prevent the construction of structures intended for human occupancy over an earthquake fault.   The California Geological Survey publishes maps of the zones as part of its work to implement the requirements of the Alquist-PrioloSpecial Studies Zone Act. These maps show the most comprehensive depiction of fault traces that can rupture during an earthquake.

Liquefaction: Liquefaction happens when loosely packed sandy or silty materials saturated with water are shaken hard enough to lose strength and stiffness. Liquefied soils behave like a liquid and are responsible for tremendous damage in an earthquake, causing pipes to leak, roads and airport runways to buckle, and building foundations to be damaged.

Tsunami: A tsunami (pronounced soo-nah-mee) is a series of waves generated in a body of water by a rapid disturbance that vertically displaces the water. These changes can be caused by an underwater fault rupture (that generates an earthquake) or underwater landslides (typically triggered by earthquakes).

The City shall require a geologic investigation for new construction on sites within (or partially within) the following zones:

A licensed geotechnical engineer shall conduct the investigation and prepare a written report of findings and recommended mitigation measures to minimize potential risks related to seismic and geologic hazards.

The City shall assume that all sites within (or partially within) any fault zone are underlain by an active fault trace until a geotechnical investigation by a licensed geotechnical engineer proves otherwise.

The City shall prohibit the placement of any building designed for human occupancy over active faults.  All buildings shall be set back from active faults by at least 50 feet.  The City may require a greater setback based on the recommendations of the licensed geotechnical engineer evaluating the site and the project.

The City shall require infrastructure and utility lines that cross faults to include design features to mitigate potential fault displacement impacts and restore service in the event of major fault displacement.  Mitigation measures may include plans for damage isolation or temporary bypass by using standard isolation valves, flexible hose or conduit, and other techniques and equipment.

The City shall coordinate with agencies responsible for the maintenance of the South Dam, the Del Valle Dam, and other small dams along Alameda Creek to ensure that dam infrastructure is maintained and enhanced to withstand potential failure during an earthquake.

The City shall coordinate with the Hayward Area Recreation and Park District (HARD), the East Bay s District (EBRPD), and the Alameda County and Water Conservation District to efficiently evacuate shoreline parks during potential tsunami events.

The City shall strive to seismically upgrade existing City facilities that do not meet current building code standards.  Where upgrades are not economically feasible, the City shall consider the relocation and/or reconstruction of facilities.