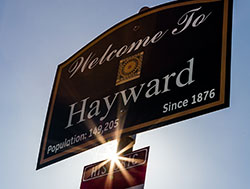 How was the General Plan Prepared?

A team of City staff and technical consultants prepared the initial drafts of the Hayward 2040 General Plan.  However, the majority of the ideas and concepts within the General Plan originated from members of the Hayward community.  By engaging in a comprehensive community involvement process, members of the Hayward community provided substantial input that influenced the formation of the General Plan goals, policies, and implementation programs.  The City Council-appointed General Plan Update Task Force provided critical input throughout the process and deserves substantial credit for assisting in the preparation of the Plan.  Finally, guidance and direction from the City Council and Planning Commission confirmed the City’s priorities and General Plan policy.

As shown in Table 1-2, the Hayward 2040 General Plan was prepared through a seven-phased process.  Each phase is described below. 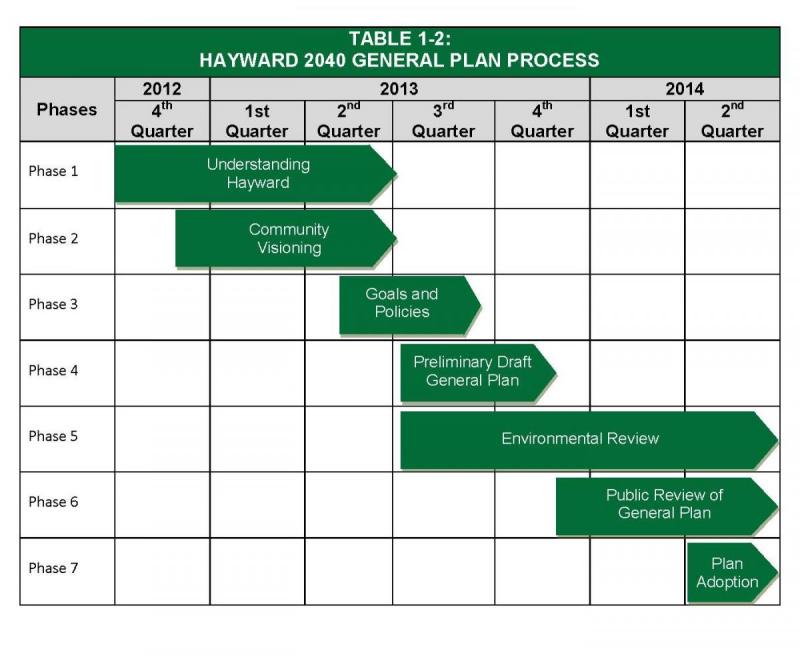 Click here for downloable PDF. For accessibility assistance with this document, please contact the City of Hayward Planning Division at (510) 583-4005.

The City initiated Phase 1 in October 2012.  This phase involved background research to gain a detailed understanding of the issues and opportunities facing the Hayward community.  A variety of topics were analyzed, including: population and housing; land use and community character; economic development and employment; mobility; natural resources; hazards, community safety; noise; schools; parks and recreation; public services and utilities; and public health.  City staff and the consultant team prepared a Background Report to summarize the major findings of the research and analysis.  The Background Report is published as a separate document but is part of the General Plan.

“Hayward is the perfect place to live, work, and hang-out.  There’s something for everyone.”

Phase 2 involved a comprehensive community engagement process that began in November 2012.  The purpose of this phase was to gain an understanding of the community’s values, priorities, and aspirations, and to work collectively to formulate a vision for the future of Hayward.  Community input was collected by the following visioning efforts:

These visioning efforts are described below. 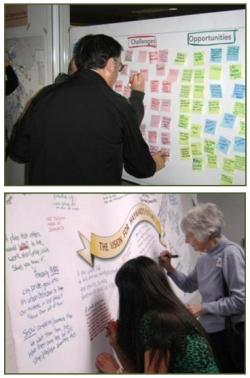 The City of Hayward conducted six Community Workshops in November and December 2012.  The Workshops were held in several locations throughout the City:

At each workshop, City Staff presented an overview of the General Plan.  The presentation described what a General Plan is and why it is important. After the presentation, community members participated in a variety of interactive exercises to provide input on the General Plan and to identify the community’s values, concerns, priorities, and ideas for improving Hayward.  After the exercises, community members participated in a large group discussion to summarize the major ideas or themes expressed during the exercises.

The City conducted a Community Survey to gain input related to a variety of topics, including transportation, dining and entertainment, education, housing, parks and open space, sustainability, and emergency readiness.  The City distributed the Community Survey at all Community Workshops, City Hall, and the Hayward Public Library.  Community members also took the survey on-line.

At each meeting, community members discussed the General Plan process and participated in a variety of interactive exercises to identify the community’s values, concerns, priorities, and ideas for improving Hayward. 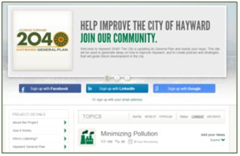 Hayward2040.org was a discussion forum and idea-generation website that helped the City get citizen input about the General Plan.  The City recognized that many members of the Hayward community would not have the time to attend community workshops and neighborhood meetings.  Hayward2040.org provided an additional opportunity for residents to participate in the process and express their ideas for improving Hayward.  Hayward2040.org was used throughout the General Plan Update process to discuss a variety of topics and ideas related to improving Hayward and establishing a vision for the future of the community.

Preparation and Review of the Draft 2040 Vision and Guiding Principles

City staff and the consultant team organized and summarized all of the comments and ideas that were generated from the community engagement efforts described above.  City staff identified the major themes that resonated with the community members and then used these themes to develop the Draft 2040 Vision and Guiding Principles. 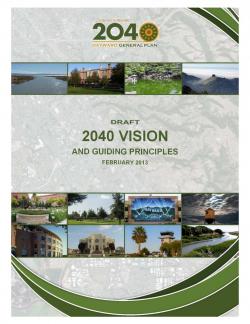 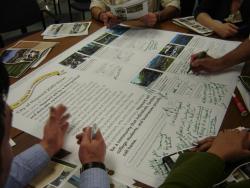 The City used Hayward2040.org to present the Draft 2040 Vision and Guiding Principles and to discuss and brainstorm ways to improve and refine the document.

“A goal is not always meant to be reached, it often serves simply as something to aim at.”

In May 2013, City staff and the consultant team began the process of preparing draft goals and policies for the General Plan.  The community visioning efforts, the Background Report, the 2040 Vision and Guiding Principles, and existing goals and policies of the City were used to guide the formation of the new General Plan goals and policies.  A special public workshop on community health was also conducted in April 2013 to gain additional insights from the Hayward community about how to address rising health problems, such as obesity, asthma, cancer, and diabetes.  Hayward 2040.org was also used to discuss and brainstorm ideas related to community health.

Once drafted, the General Plan Update Task Force, Planning Commission, and City Council reviewed the goals and policies at the following meetings and work sessions in May, June, and July 2013: 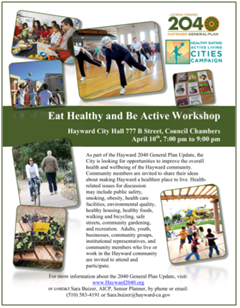 After each meeting and work session, City staff and the consultant team revised the goals and policies based on input and direction from the Task Force, City Council, and Planning Commission.​

Based on direction and feedback received at the meetings, City staff and the consultant team revised the Preliminary Draft General Plan. 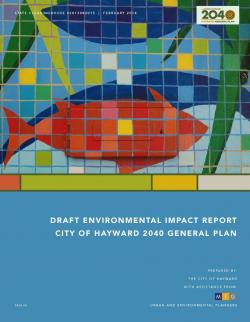 The environmental review of the Hayward 2040 General Plan began in August 2013.  The City released a Notice of Preparation on August 5th and held an Environmental Impact Report Scoping Meeting on August 15th.  City staff and the consultant team then prepared a Draft Environmental Impact Report (EIR) to analyze the potential environmental impacts of the Hayward 2040 General Plan and to identify mitigation measures to reduce potentially significant impacts.  The City published the Draft Environmental Impact Report in February and the 45-day review and comment period occurred between February 4, 2014 and March 21, 2014.  Three public meetings were held during the review and comment period to present the major findings of the Draft EIR and to receive comments from the public and members of the Planning Commission and City Council:

City staff and the consultant team responded to comments on the Draft EIR and prepared and released the Final EIR on May 19, 2014. The Final EIR was certified by the City Council on July 1, 2014.

The adoption process for the Hayward 2040 General Plan involved public hearings by the Planning Commission and City Council:

After the adoption of the General Plan, the document was converted to a web-based format.  The web-based format allows users to easily search and find topics of interest.